Hawks tend to symbolise awareness, intelligence and a regal bearing. Possibly this is a sense of what is to come – the intelligent and ambitious Anne Boleyn losing awareness of her position as queen and what it relies on (Henry VIII’s love) and ending up being beheaded on the orders of her husband, the king. In the case of the fall of Anne Boleyn the fox represents Cromwell, and the hens are Anne and her faction who are brought down. However, this could also foreshadow what is to come for Cromwell when he becomes one of the hens, along with the rest of the reformist party, and they are attacked by the foxes (the conservative faction).

2. How has Cromwell’s upbringing influenced him to become the shrewd and ambitious man that he is? What is the significance of Cromwell refusing to adopt the coat of arms belonging to a noble Cromwell family even as he widens the chasm between his father and himself? How does Cromwell view family and how is it different from his own experience growing up?

I think the fact that Cromwell had such a difficult relationship with his father encourages him to get away and prove himself. He wants to be a better person than his father. I think this difficult relationship also enhances Cromwell’s ambition and desire for power – he wants to feel the power that he didn’t have when at the mercy of his father. Cromwell doesn’t want to be a part of the inherited nobility – his religious beliefs encourage the rise of self-made men, and promoting them on the basis of their abilities and not their wealth or title. I think Cromwell doesn’t want his own wife and children to experience the family life he had when he was younger – he tries very hard not to exhibit the same characteristics as his father did, and tries to create a happier home. END_OF_DOCUMENT_TOKEN_TO_BE_REPLACED 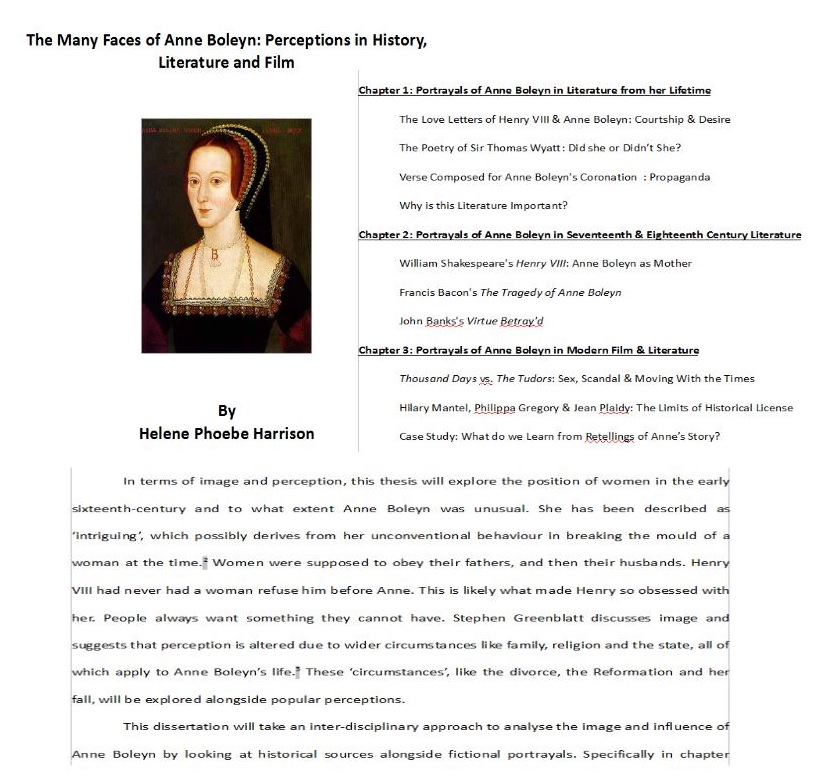 A small snippet of what I’ve been working on lately, and why I haven’t updated much – my Masters thesis!

I finally finished reading Hilary Mantel’s (relatively) new book Bring Up the Bodies and this is my review.

Generally, I thought it was engaging and well-written. However, I was a little disappointed. I don’t know if that’s just because it was so hyped up, and then it won the Man Booker Prize, but I just felt that it was a bit slow to get into the story. I preferred Bring Up the Bodies to Wolf Hall, however, partly because it was more ‘my’ period – the fall of Anne Boleyn, but also because it looked at more outside Cromwell’s own life, and it examined opinion and perception., which is a huge part of my own research.

END_OF_DOCUMENT_TOKEN_TO_BE_REPLACED

Yesterday (16th October 2012) Hilary Mantel, author of Wolf Hall, won the Man Booker Prize for the second time for her follow-up novel, Bring Up the Bodies. I haven’t read it yet, but it is on my to-read list. However, I have read Wolf Hall. I’m particularly excited about this one because it focuses on the period I am most interested in – the fall of Anne Boleyn. According to the Telegraph (http://www.telegraph.co.uk/culture/books/booker-prize/9612717/Booker-Prize-2012-Hilary-Mantel-wins-again.html):-

“The prize confirms Mantel’s gift for writing historical fiction, of course, but also the historic nature of the project itself: her trilogy about the life of Thomas Cromwell will surely, by the time she has finished, come to seem an achievement of era-defining proportions – one in which, as she put it recently, “I knew from the first paragraph that this was going to be the best thing I’d ever done”.” END_OF_DOCUMENT_TOKEN_TO_BE_REPLACED