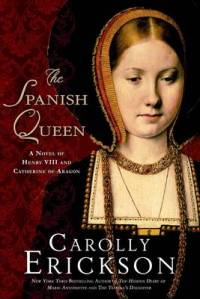 When young Catherine of Aragon, proud daughter of King Ferdinand and Queen Isabella, is sent to England to marry the weak Prince Arthur, she is unprepared for all that awaits her: early widowhood, the challenge of warfare with the invading Scots, and the ultimately futile attempt to provide the realm with a prince to secure the succession. She marries Arthur’s energetic, athletic brother Henry, only to encounter fresh obstacles, chief among them Henry’s infatuation with the alluring but wayward Anne Boleyn. In The Spanish Queen, bestselling novelist Carolly Erickson allows the strong-willed, redoubtable Queen Catherine to tell her own story-a tale that carries her from the scented gardens of Grenada to the craggy mountains of Wales to the conflict-ridden Tudor court. Surrounded by strong partisans among the English, and with the might of Spanish and imperial arms to defend her, Catherine soldiers on, until her union with King Henry is severed and she finds herself discarded-and tempted to take the most daring step of her life. [Description from Waterstones]

I was looking forward to reading this novel as I hadn’t read any of Erickson’s novels before, but I did enjoy her biography of Anne Boleyn. ‘The Spanish Queen’ was well-written and engaging, and the story kept moving, unlike some historical fiction which can be a little dry at times. Perhaps this increased engagement was sheer surprise at how much of the historical record has been changed!

Writers and filmmakers often take historical licence to weave a good story, but I don’t think that the story of Katherine of Aragon, Henry VIII’s first wife, needed any additional drama or shock, as it is quite enough of a tale on its own. Some of the changes I really took affront at – like Henry VIII and Katherine of Aragon seeing each other again after he left her for good, and Katherine being outside the room when Anne Boleyn gives birth to Elizabeth I. These would never have happened in real life, so I really struggled to believe it in the story as well. Perhaps that’s my downfall with historical fiction – if it’s a period I know so well all I can think about are the historical inaccuracies.

However, I did feel that the story was well-written and the characters came across as incredibly real, even if parts of the story I didn’t find entirely believable. I loved Katherine as a character, and how she inspired so much loyalty. The way that Anne Boleyn was portrayed seemed to be a bit of a caricature of how the people saw her – a witch who bewitched the king into loving her when she wasn’t even particularly pretty. I understand why Erickson portrayed her this way when it was told from Katherine’s point of view.

It was quite an easy read for historical fiction, and I think anyone who has an interest in the Tudor period should give it a go, but just take the history with a pinch of salt. I’m looking forward to reading other novels by Carolly Erickson and seeing how she portrays different historical figures, as looking at the perceptions in this novel I can imagine that there are other people and events that are very different from how I think they would be or what the historical record tells us.

END_OF_DOCUMENT_TOKEN_TO_BE_REPLACED 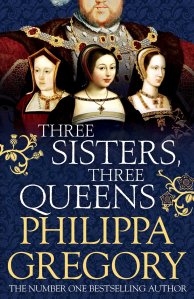 END_OF_DOCUMENT_TOKEN_TO_BE_REPLACED

What was it really like to be married to Henry VIII?

Warrior queen who taught Henry how to be a king

Love, passions and tragedies that tore them apart

Katherine was to be English queen END_OF_DOCUMENT_TOKEN_TO_BE_REPLACED

Henry VII decided to name his firstborn son after the legendary King Arthur and he decided that Winchester was representative of Camelot. In the 16th century the location was St Swithin’s Priory in Winchester (today Winchester Cathedral Priory). He was born at around 1am on 20 September 1486, just 8 months after the marriage of his parents, meaning he was either 1 month premature, or his parents had consummated their union without waiting for an official marriage.

Prince Arthur would later marry Katherine of Aragon, but would die just short of his 16th birthday in 1502, leaving his brother to become the future Henry VIII.

Event– Marriage of Henry VIII and Katherine of Aragon

The wedding of Henry VIII and Katherine of Aragon isn’t as well-known as their very public divorce. Katherine was the widow of Henry’s older brother, Arthur, who had died in 1502. Henry would later allege that this was an impediment from which the Pope couldn’t dispense.

Katherine and Henry had been betrothed for 6 years by the time that they married, and it wasn’t certain that they would marry even after the betrothal. When Katherine’s mother, Isabella of Castile, died Katherine was seen as less valuable on the marriage market as she was no longer the product of a united Spain. Henry VII began to look elsewhere for a bride for his son.

When Henry VII died in 1509 Katherine’s fortunes changed overnight and the marriage negotiations were successfully brought to an end in May 1509. The marriage licence was issued by the Archbishop of Canterbury, William Warham, on 8 June 1509.

The marriage was a private ceremony in the queen’s closet at Greenwich Palace on 11 June 1509 with just a couple of witnesses in attendance. Katherine was aged 23 and Henry just 18 – she was beautiful still and he was in his prime. The marriage wasn’t only a love match (it was rumoured that Henry wanted Katherine when she was married to Arthur), but a political one as well.

As soon as the wedding itself was over, preparations were made for their joint coronation which happened just a couple of weeks later.

END_OF_DOCUMENT_TOKEN_TO_BE_REPLACED

Storyline: From Henry VIII’s childhood until his death in 1547. The novel covers Henry’s imagined childhood in some detail, looking at the death of his mother and brother, his accession to the throne, his quest to beget a son to succeed him and the relationships with his wives. There is also a spectre in the background haunting him. END_OF_DOCUMENT_TOKEN_TO_BE_REPLACED

Bradgate House = Bradgate House is now a ruin, but it was home to the Grey family, descended from the first son of Elizabeth Woodville by her first husband. Lady Jane Grey and her sisters, Katherine and Mary, grew up here. The Grey family lived here for two hundred year until 1739, but a newer house, also in ruins, now stands nearby to the original ruins. More of the Tudor chapel and tower stand now than of the house itself.

Burghley House = Burghley House was built by William Cecil, Lord Burghley. He was the most trusted councillor of Elizabeth I, and very focused on trying to catch Mary Queen of Scots in conducting treason. Burghley’s changes to the house took from 1555 to 1587, but little of the Tudor inside now remains. Burghley House is the only one of Cecil’s many properties still standing today, though it has been much changed. END_OF_DOCUMENT_TOKEN_TO_BE_REPLACED

The marriage between Prince Arthur and Katherine of Aragon had been in the making for two years before it actually took place, and it had been proposed as early as 1489.[i] The marriage between Arthur and Katherine of Aragon was intended to involve England in European politics.[ii] England had been in the midst of a civil war for half a decade, but now she was ready to re-enter international affairs. The only job intended for Katherine was to produce sons and heirs for the English throne.[iii] Their children would unite the blood of England and Spain. A dispensation was needed to allow the marriage to go ahead, as Katherine and Arthur were both descended from John of Gaunt.[iv] Gaunt was the third surviving son of Edward III.